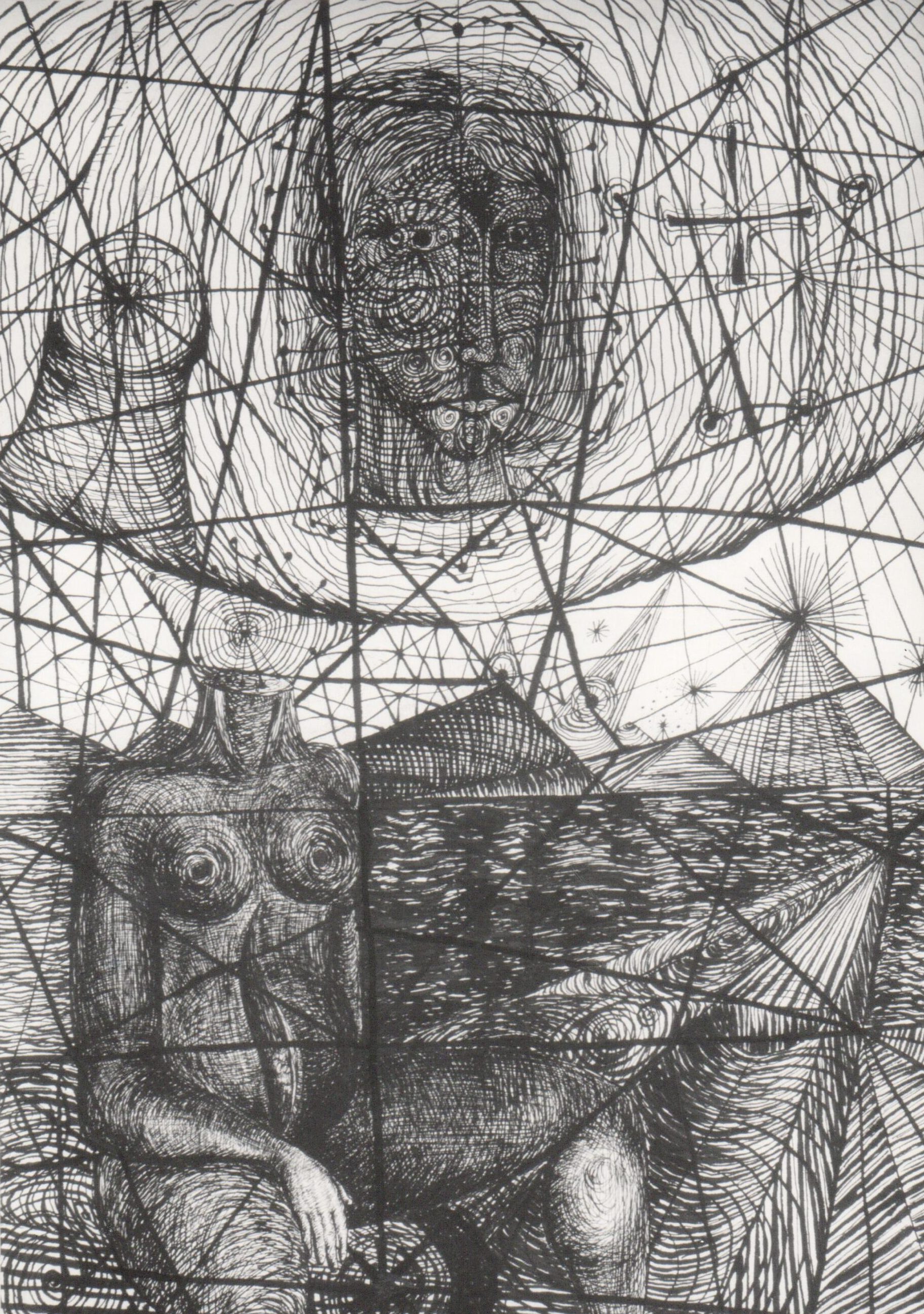 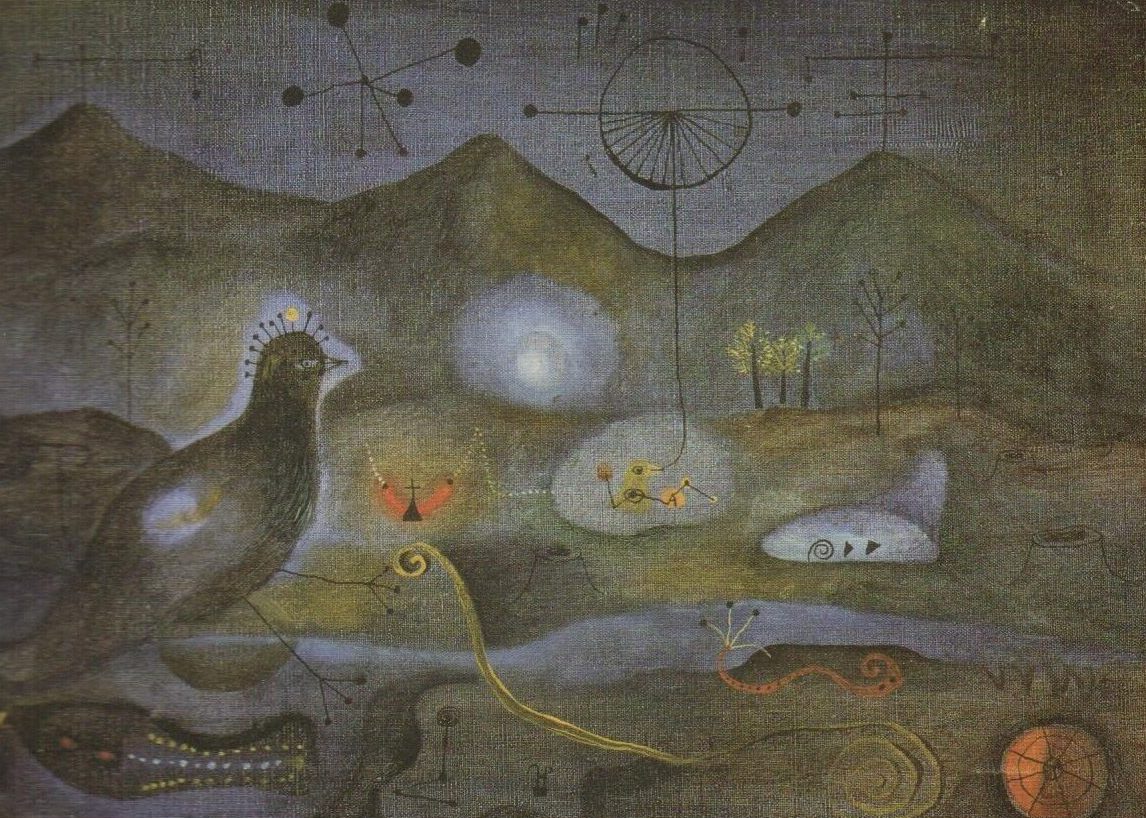 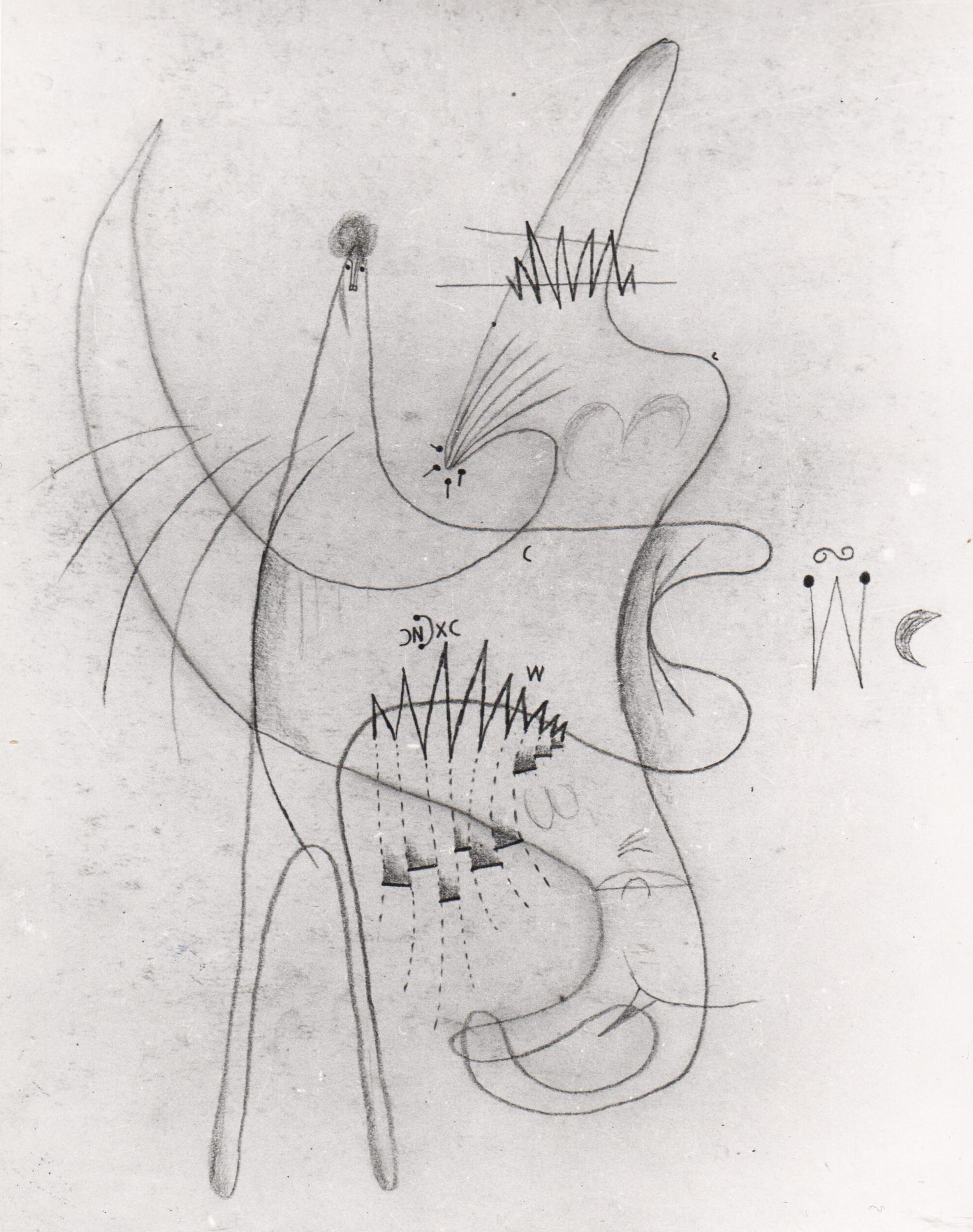 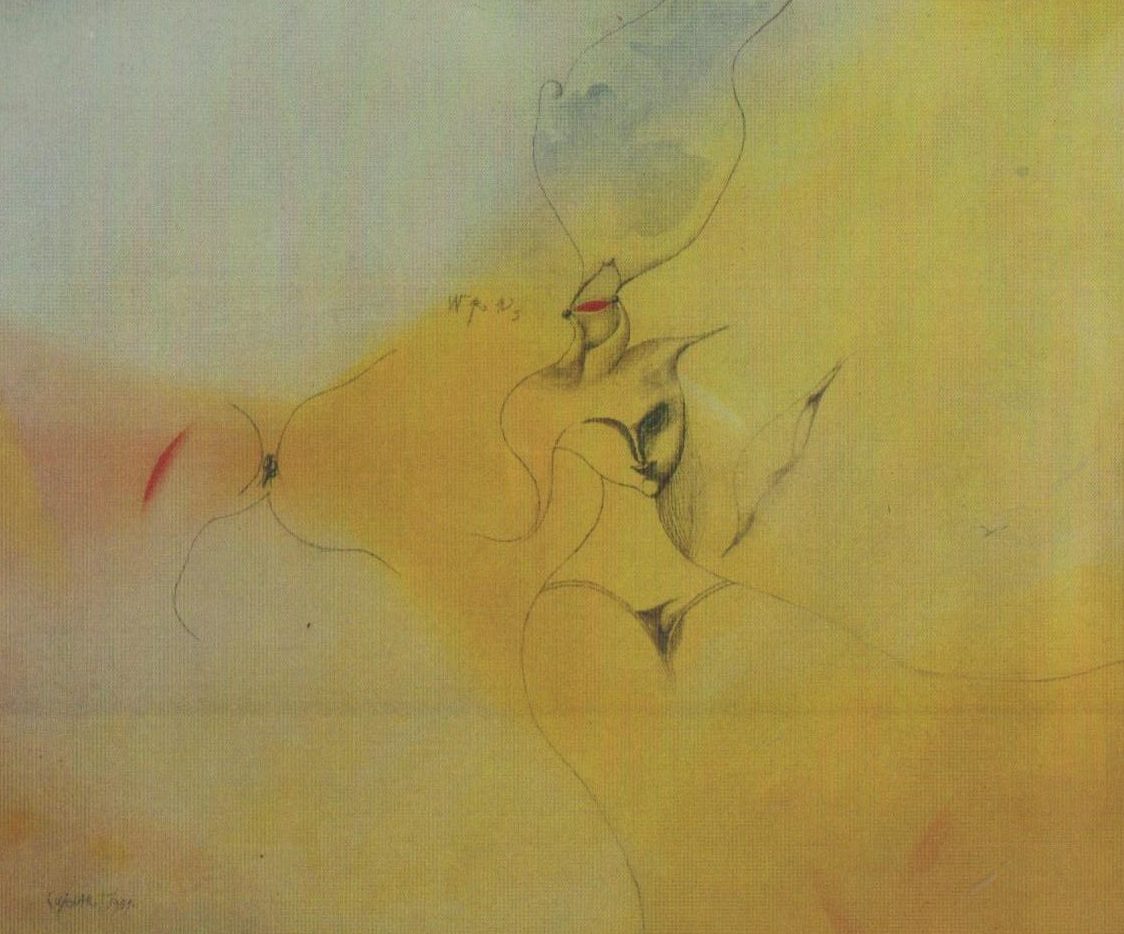 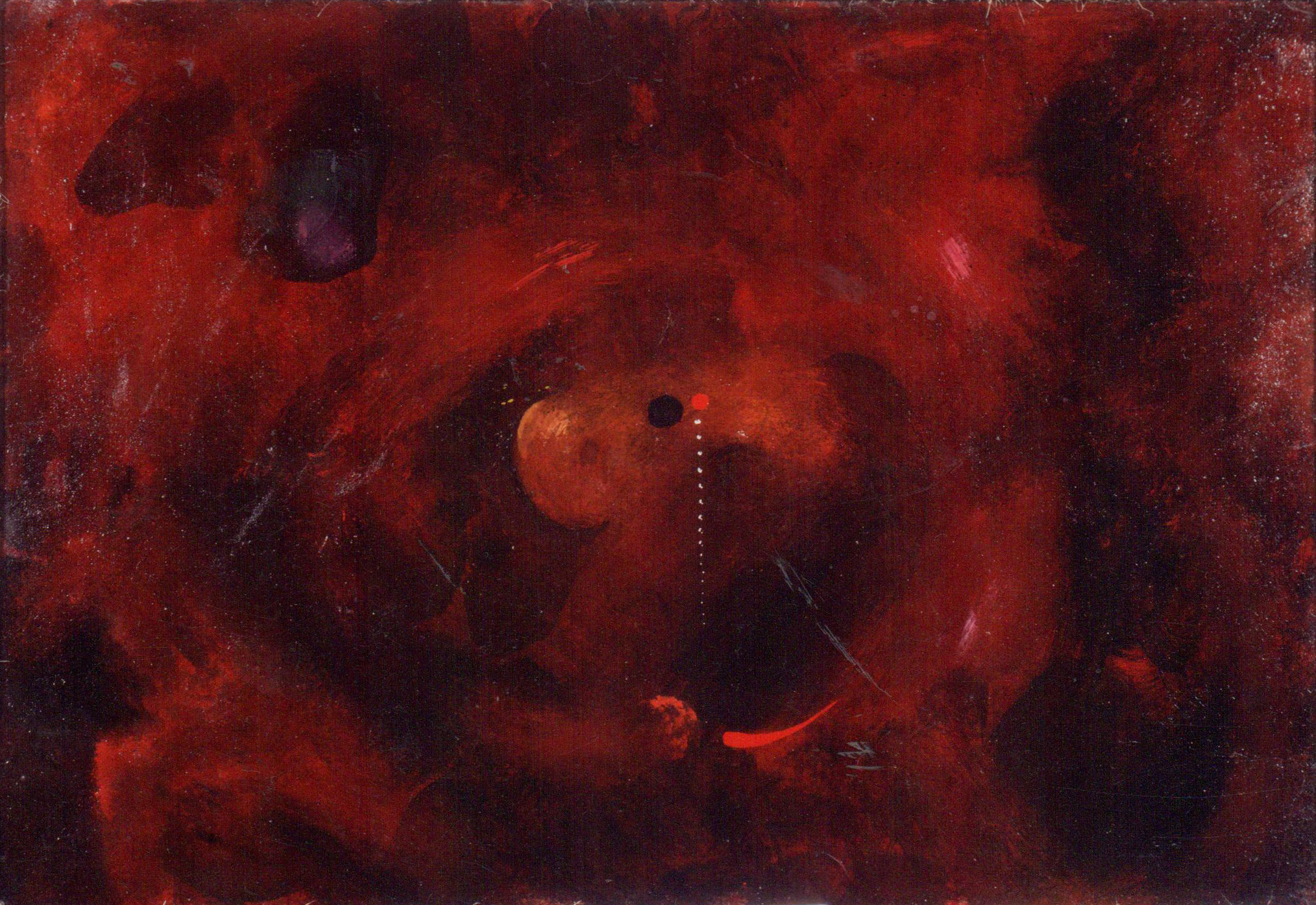 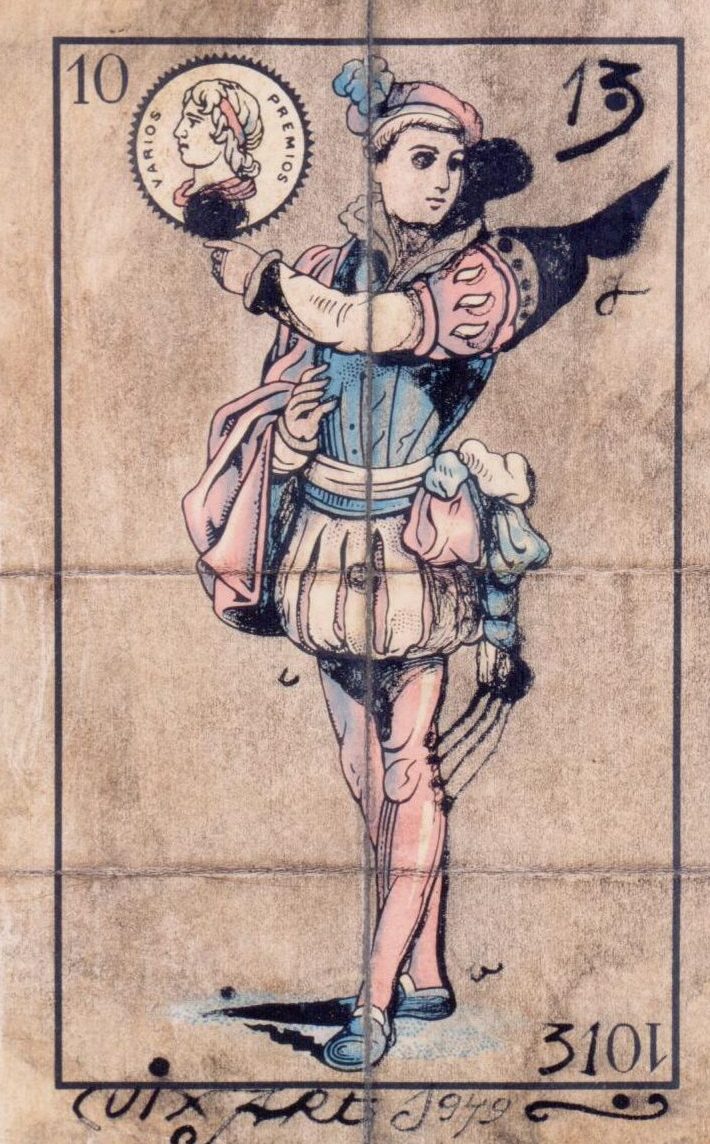 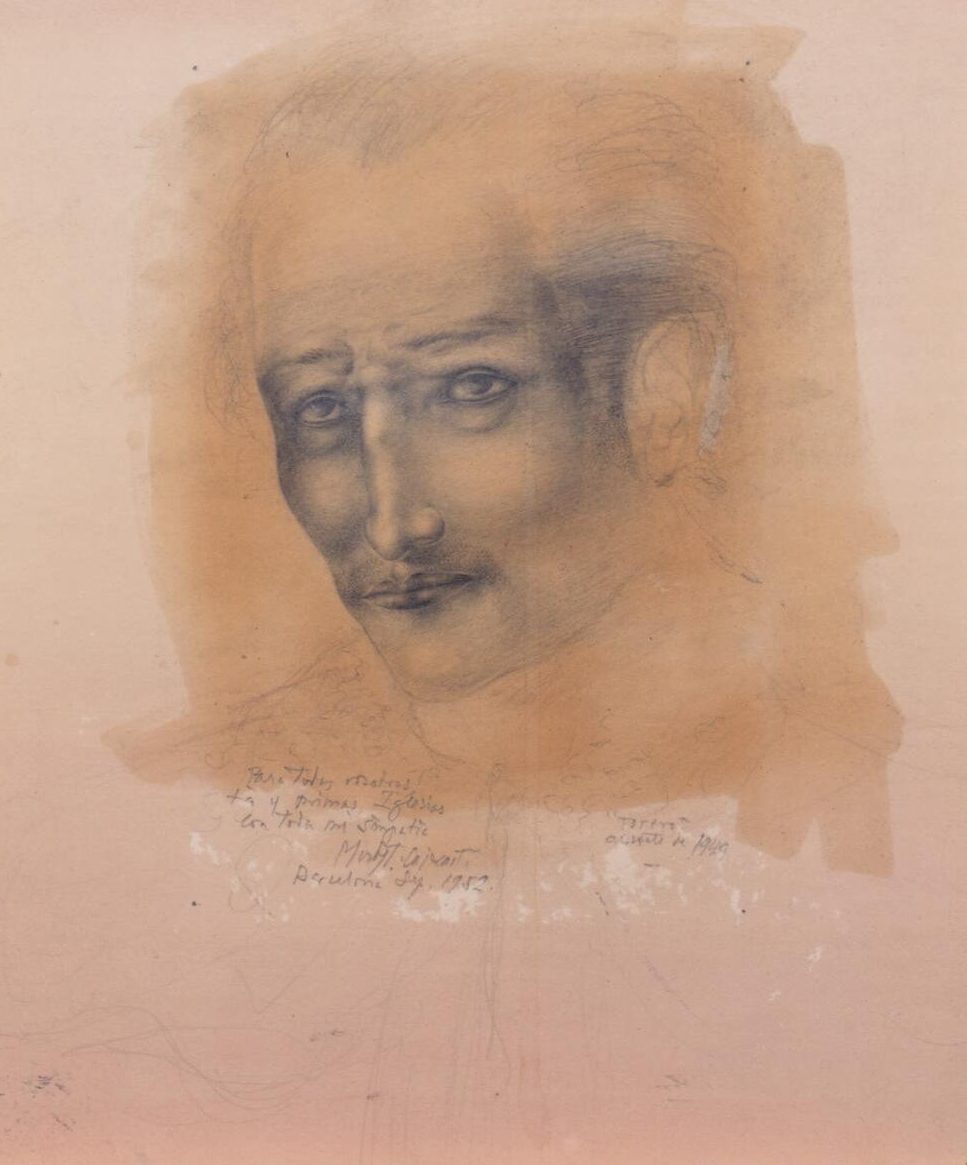 Modest Cuixart, aged 17, begins his career, fascinated by the work of Miro and Picasso and Paul Klee.

“The artist cannot get rid of the past, it is part of the next link. Although it is a distant past or a recent past, each artist is a heterogeneous world that cannot fail to be aware of what has been seen, read or Sense. Without memory, art would not exist and art as all human activities, of lesser importance.” Modest Cuixart,Palafrugell 1994

Dau Al Set is an Avantgard artistic group with a rebel spirit, surrealistic and dadaist character created around the eponymous magazine in Barcelona in September 1948.

” In us, there were no programs. As in surrealism point of view that his pontiffs had, the program we had was our spirit to break the molds. To move forward. To open.To explain. With the pretension of showing the world a new literary and plastic language defined by Cirlot as “Plastic Magicism.” Modest Cuixart, extracted Biography Unfinished.

With this spirit, in 1946, Joan Josep Tharrats, along with Modest Cuixart, Antoni Tàpies , Joan Ponç, Joan Brossa and Arnau Puig, would form Dau al Set. First is assigned to the surrealist movement to converge in its own style, the magazine that conducted the group began to be published in September 1948 and stopped publishing in 1956. 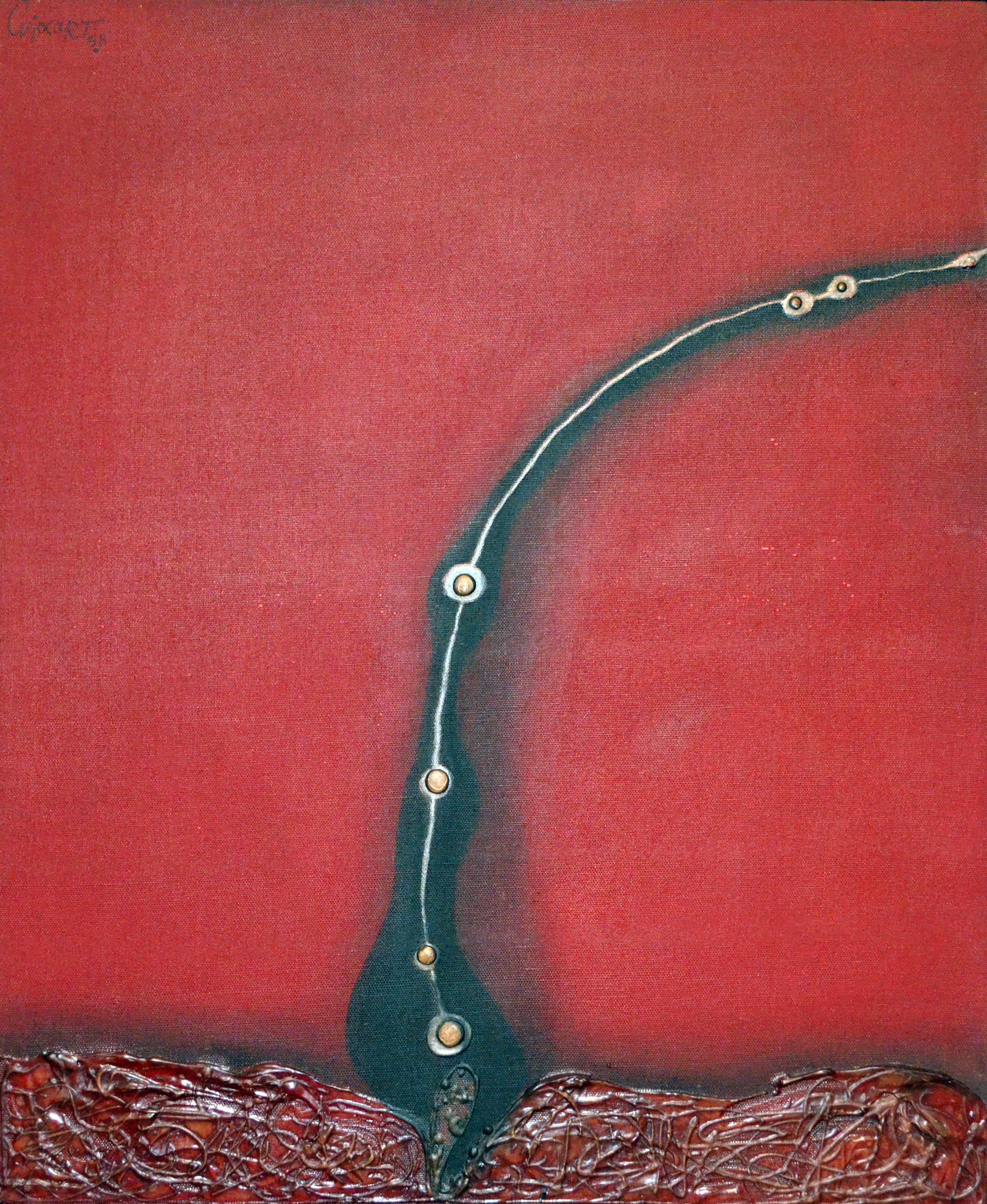 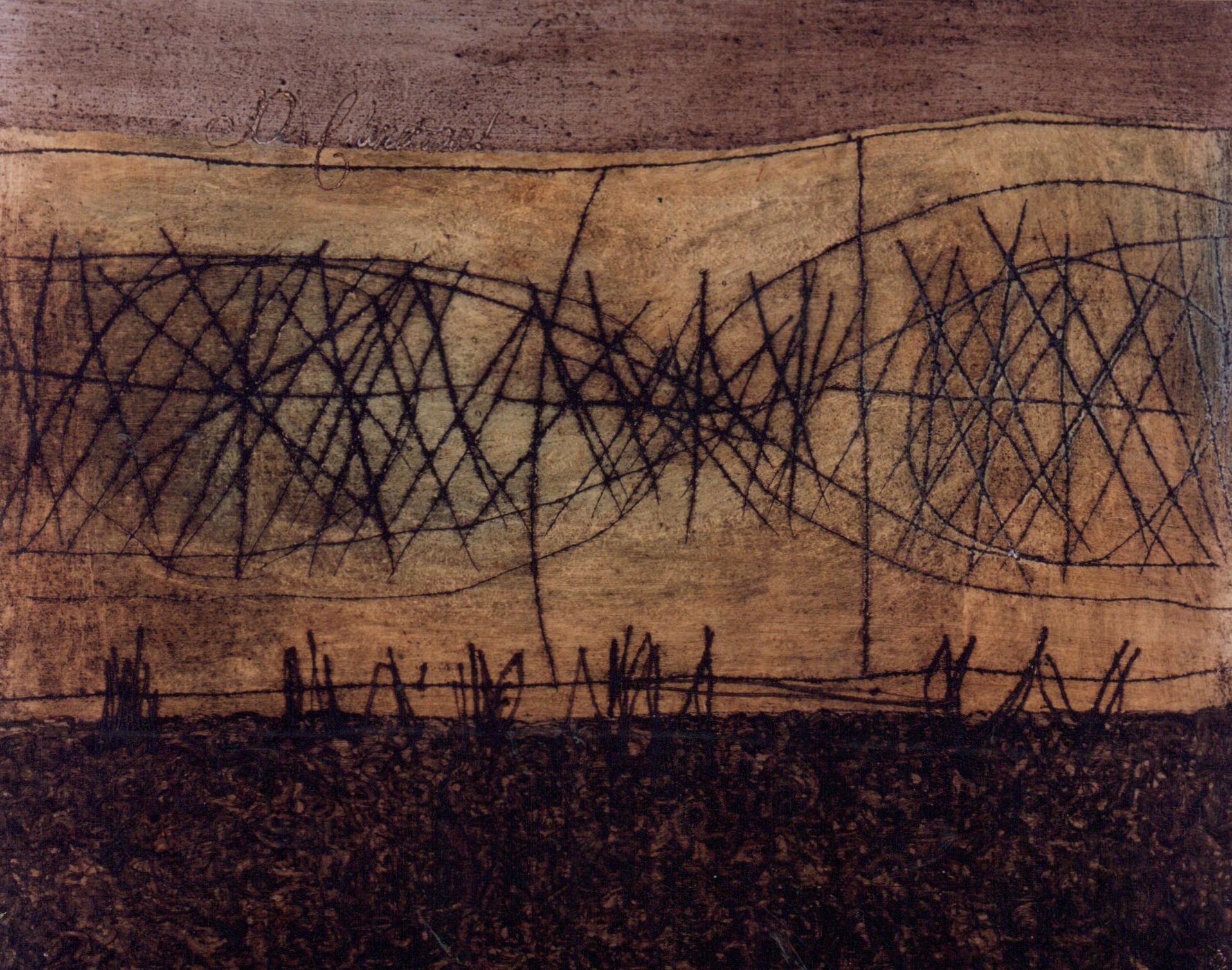 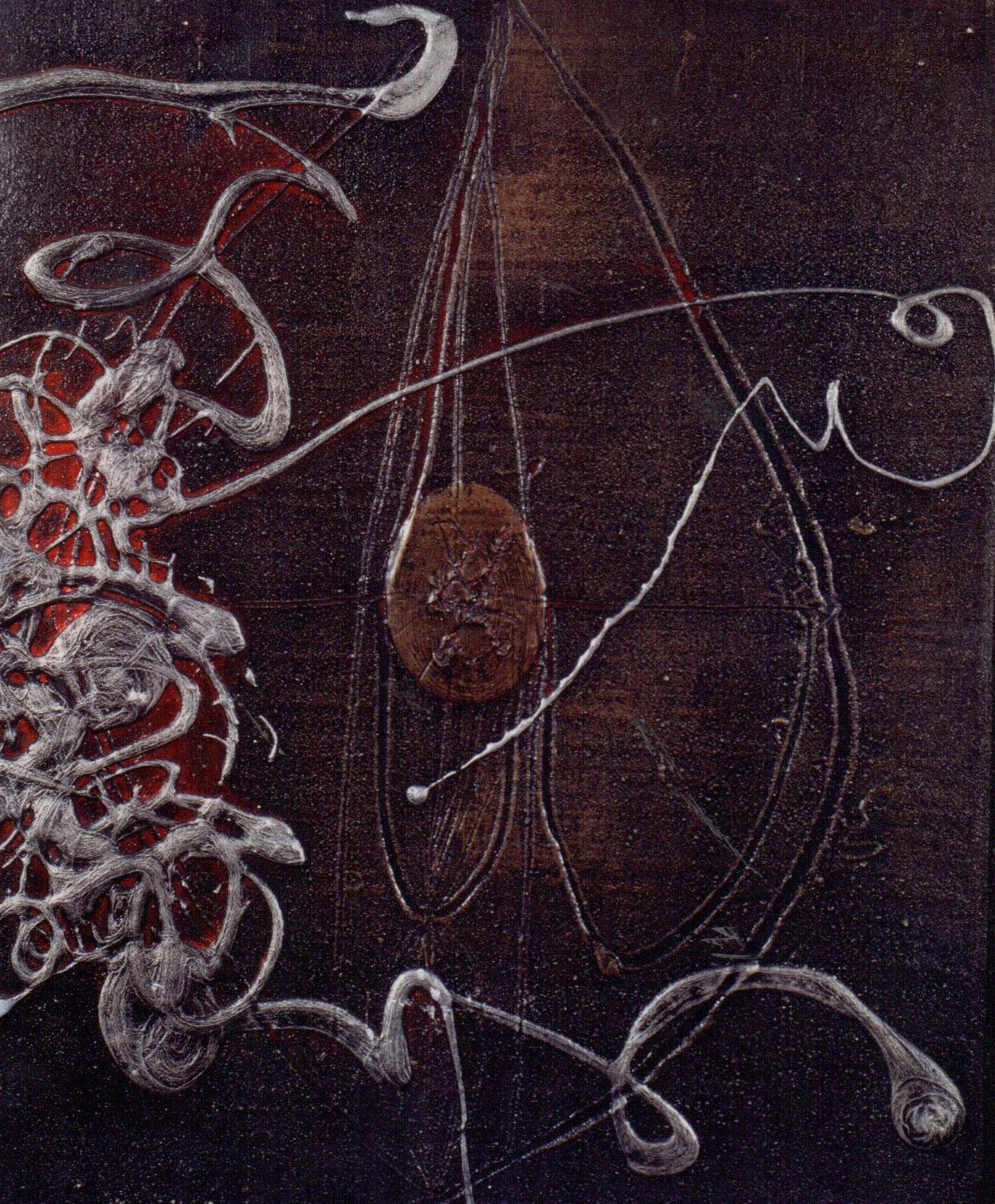 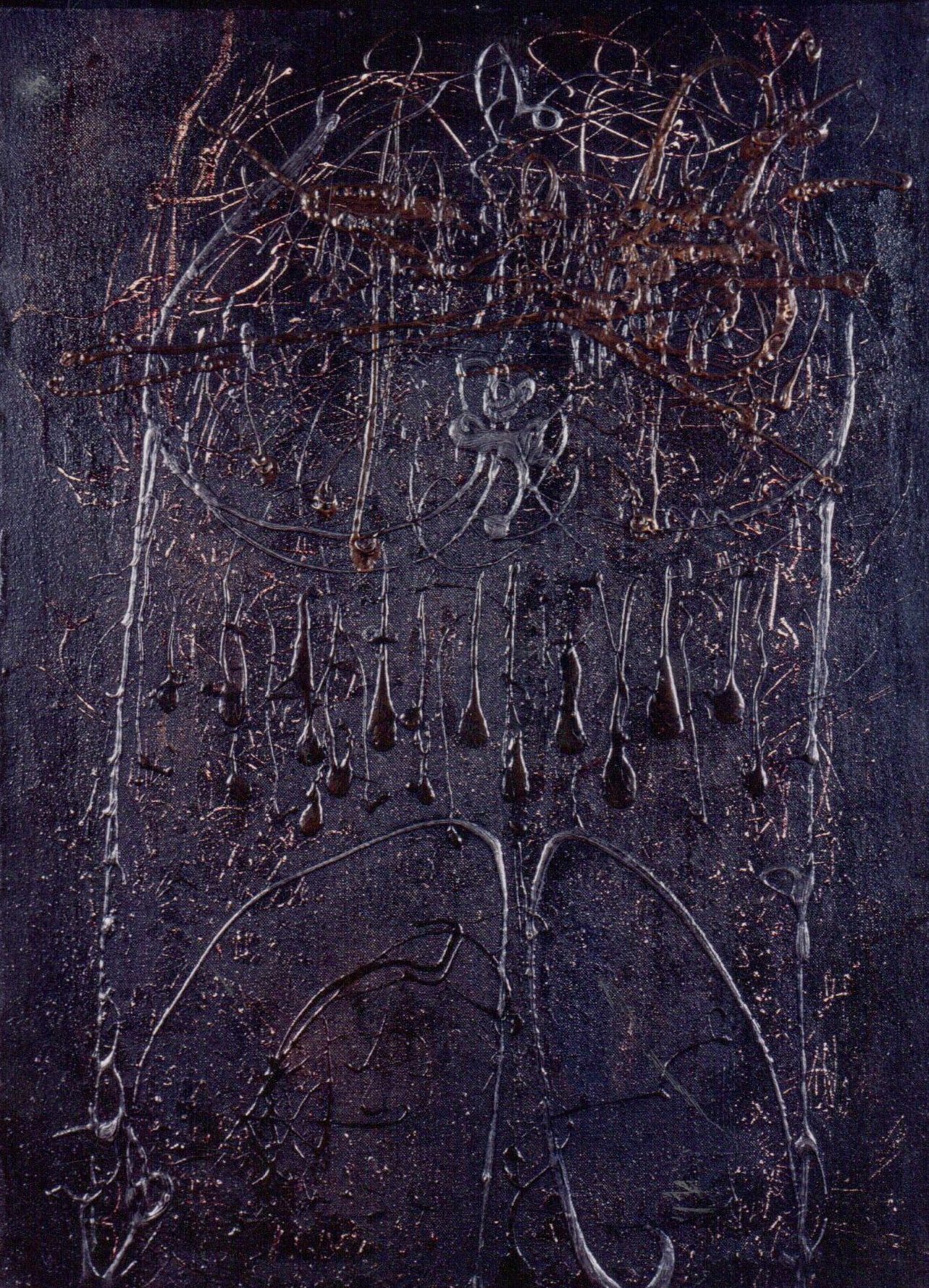 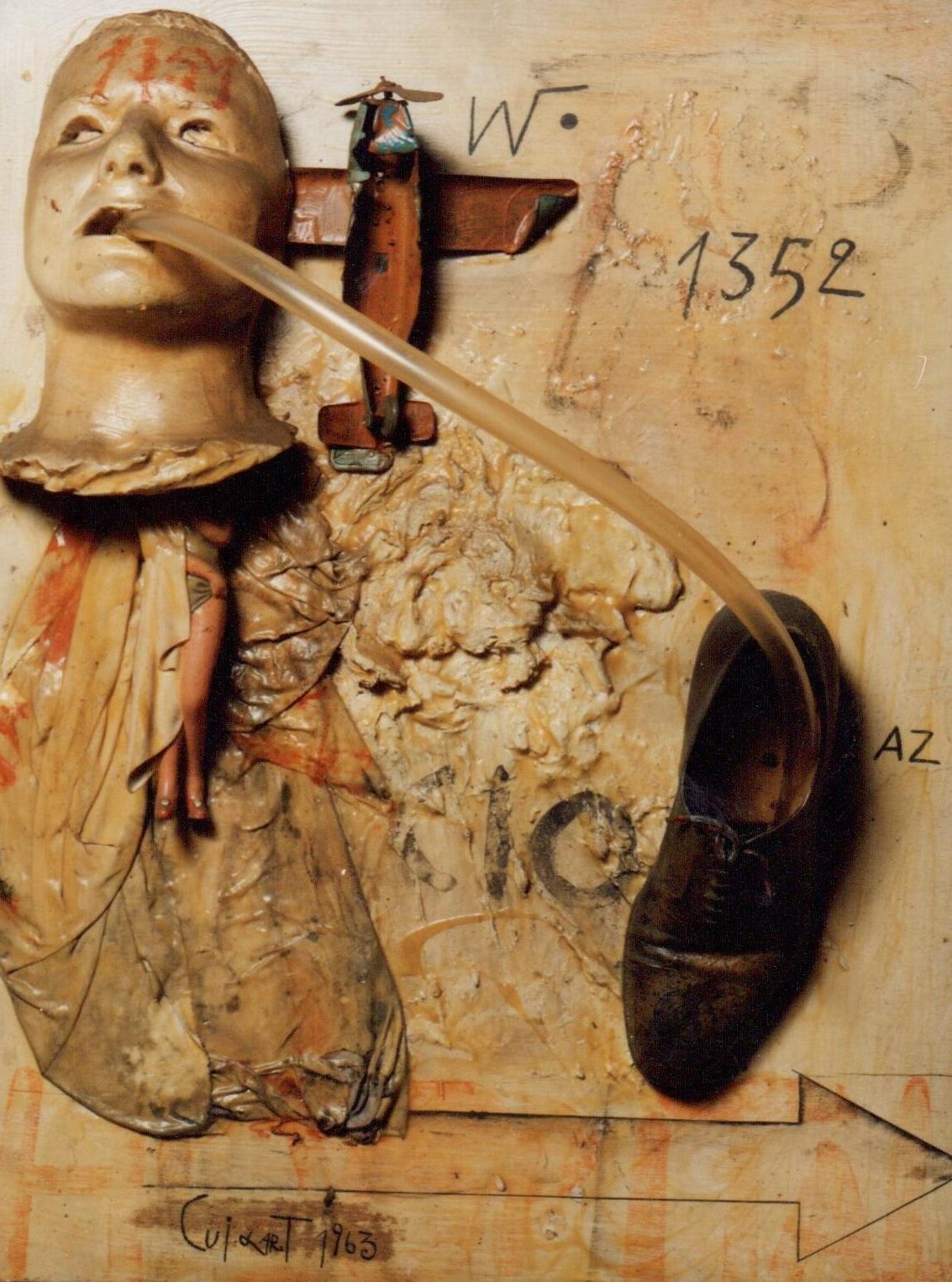 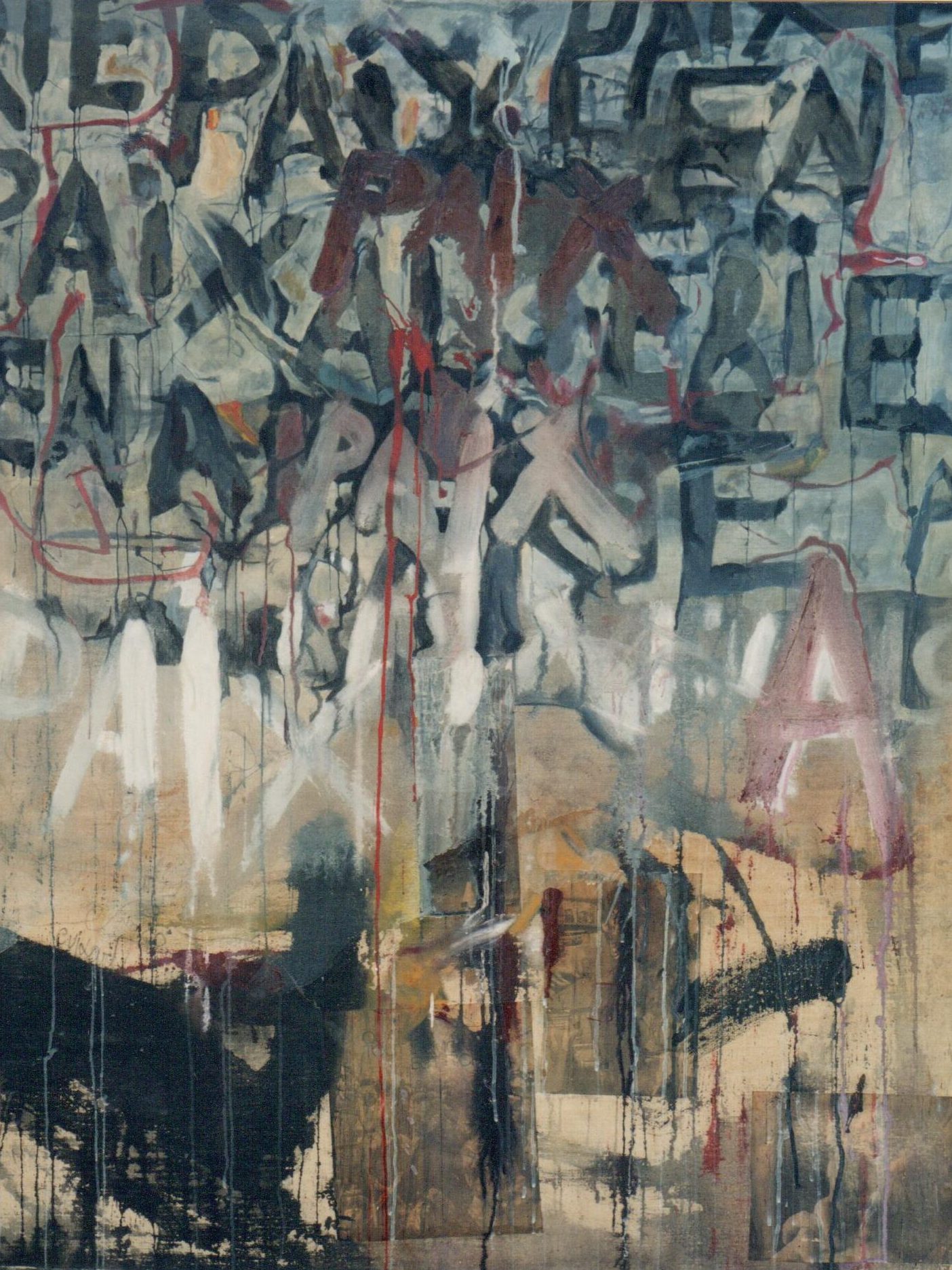 Years after the end of the Second World War, is characterized by mattering experimentation and art becomes another survivor. Making art with used and old materials part of the objects that were left out in the city. With the other art, it is granted to the objects, a new life, be part of the other story, the history of postwar art. Modest Cuixart gives life to his works with old postcards. Objects over which with a gesture of creation he enlisted them in the work. Also, it is a stage marked by the fascination for “textures”. The sense of matter of a substance, its softness or roughness, its transparency or density and its veiled forms. With the work Suite won the international painting prize at the V Biennial of Sao Paulo, in 1959. In Lyon he worked in a  dyeing fabrics workshop for fabrics where he developed the color. Later, with the help of René Drouin, he began exposing himself to Paris. It was linked to the gallery owner René Metrás and the Taüll group. It was a stage in which the painting of Cuixart becomes informalist. The object is paying tribute to the postwar period, art povera, collage and assembling. At this time, Cuixart’s painting is dark, black with gold and metals, following the school of action painting and the most marked informalism. 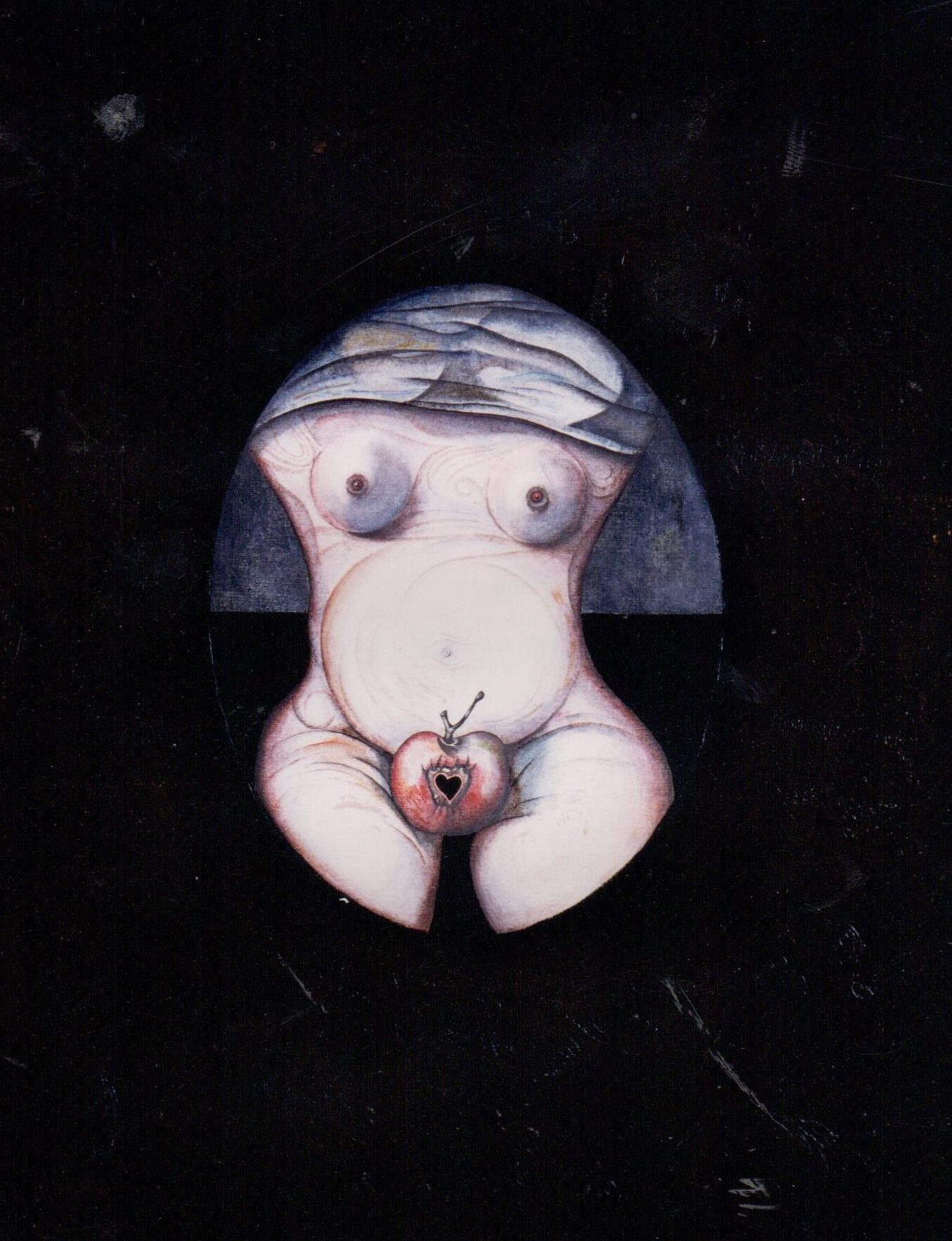 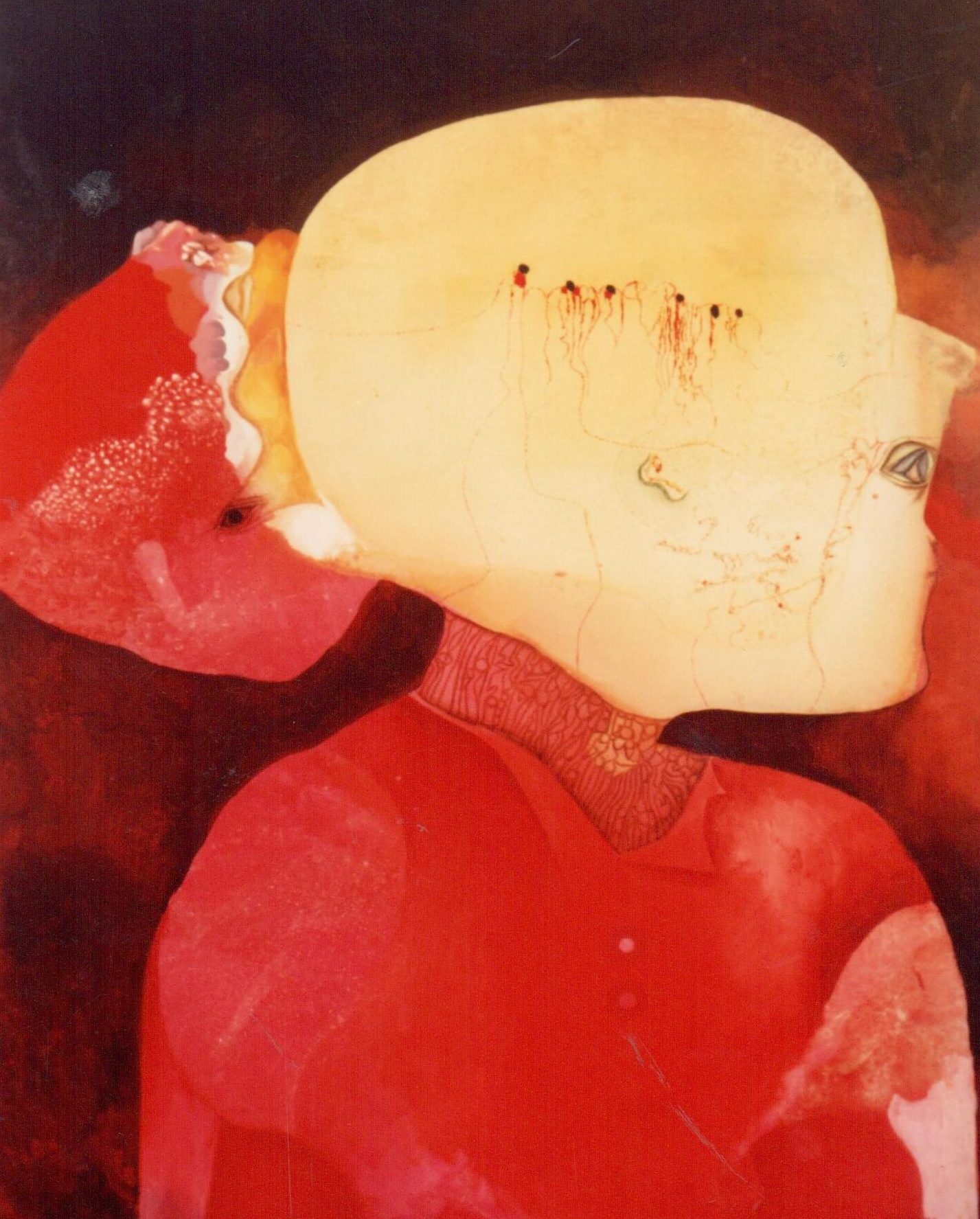 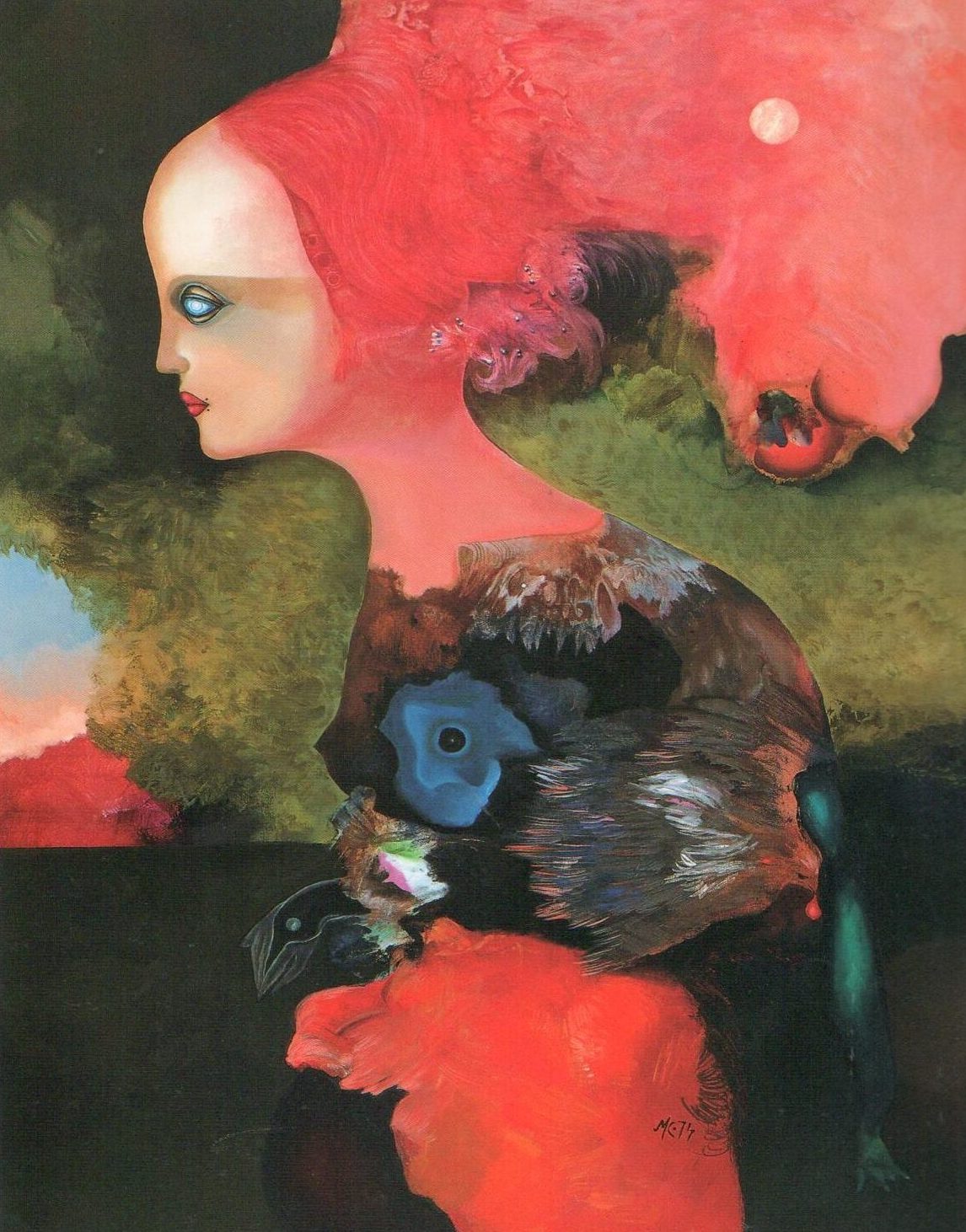 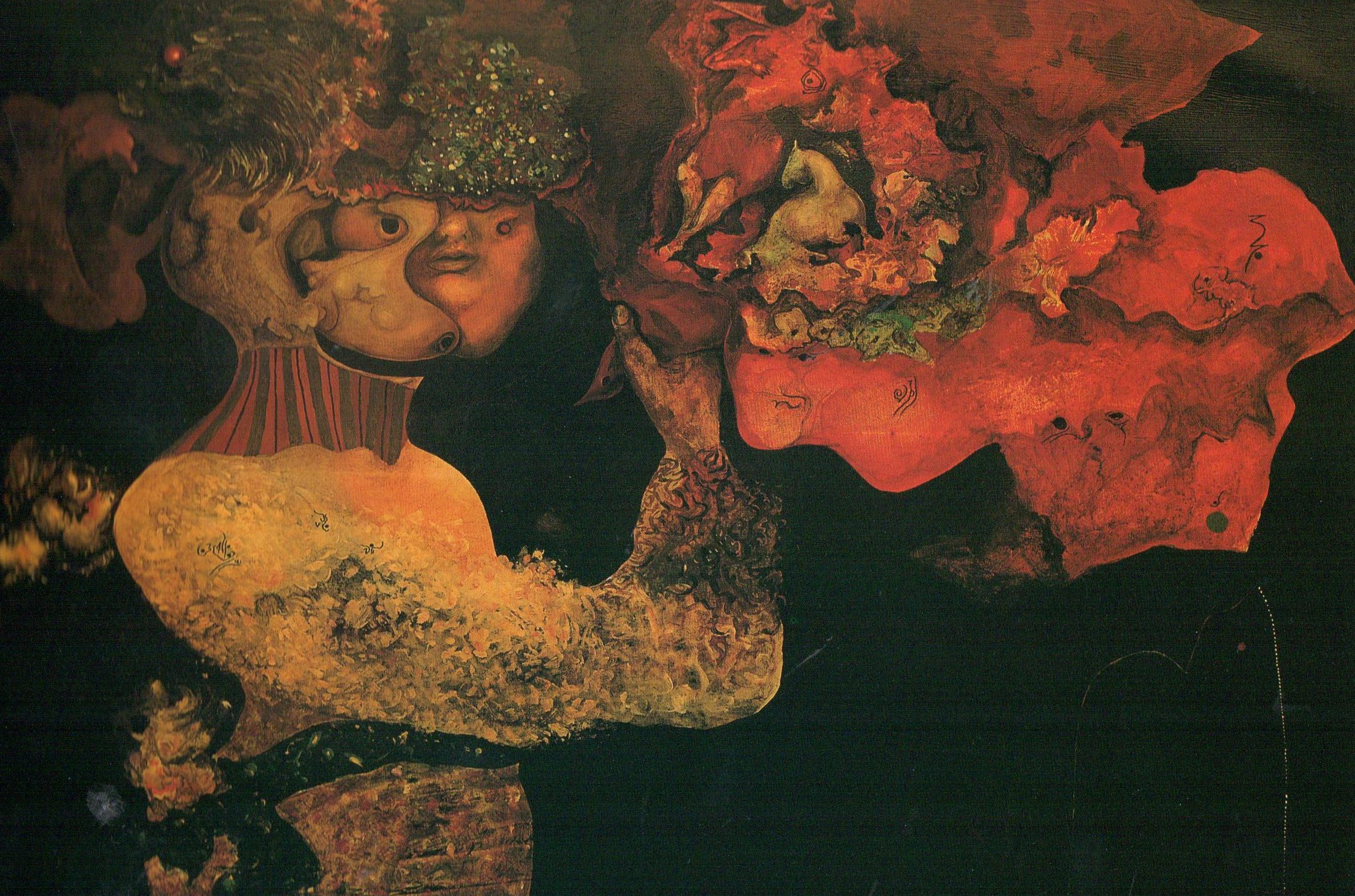 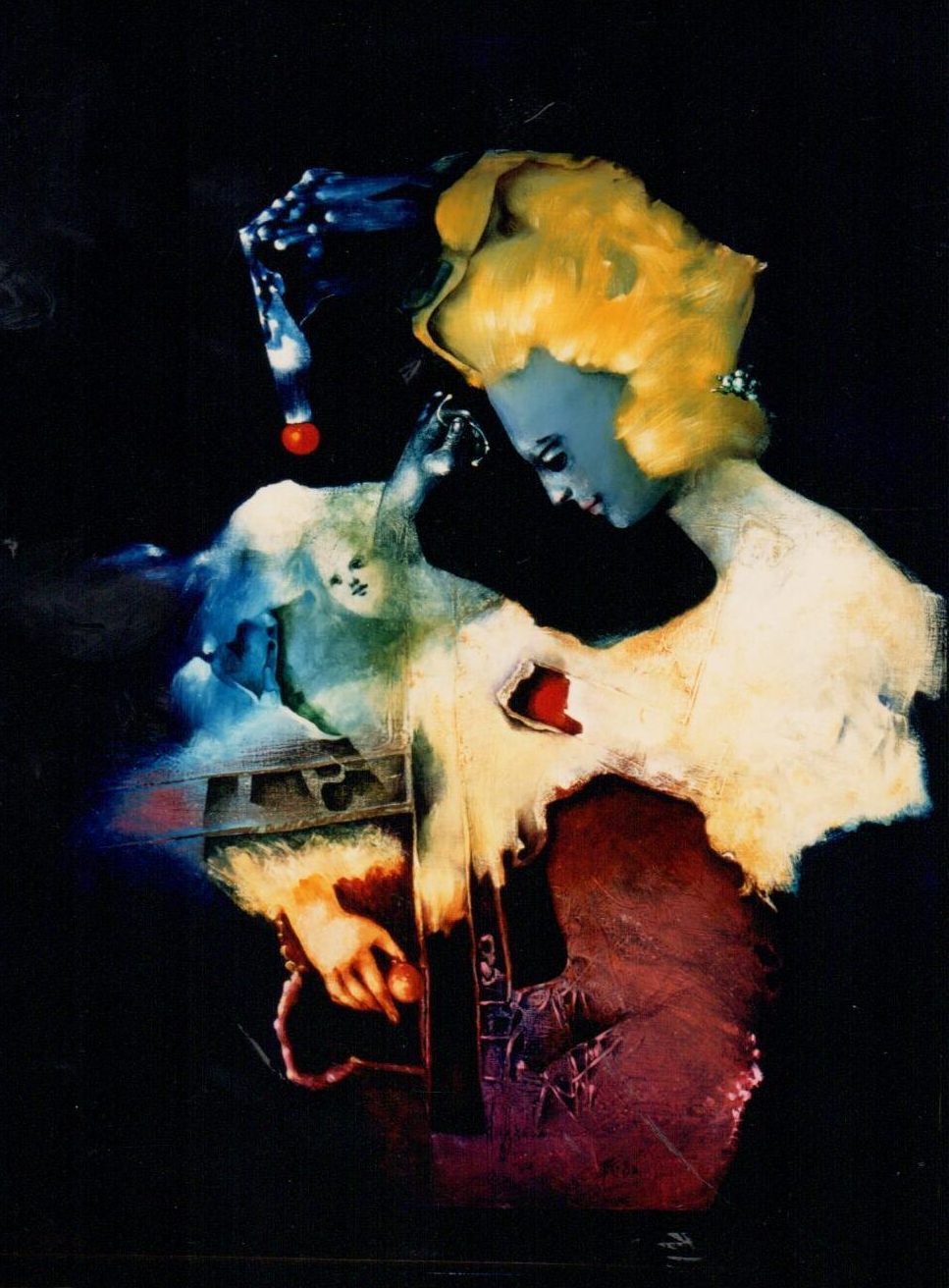 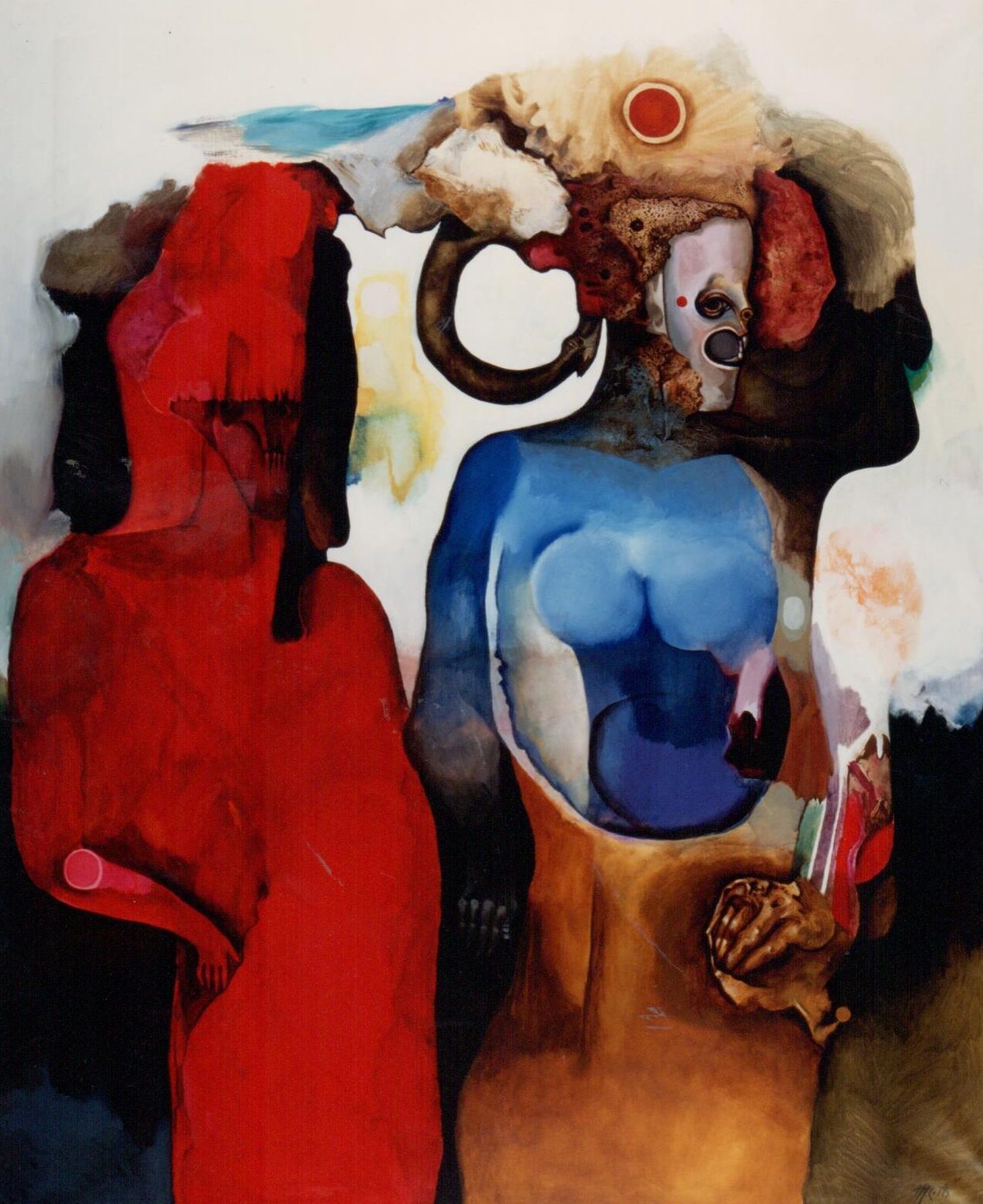 His paintings are no longer material , dark and informal. instead of is painting begins with the figure. Begins with ADAN and EVA a stage where he combines informalism with grattage, ink and soft colors. This new age are named and known as the Pink stage. Time of great formal and technical balance, where Cuixart demonstrates his great ability to coincide, with much mastery, two opposing poles, that is to say: the strength and forcefulness of the matter that represents his masculine part and the elegant and subtle drawing that represents its most feminine part. With the memory of the death of his mother, Maria Tàpies, who had to survive with four children hitting a workshop in Barcelona. Modest Cuixart makes women a muse and creates fantasy and surreal “women with hats”. With a strong contrast of color, it is inscribed within the “plastic magiscismo”, breaking with the informalist norms of the figure. It is shown, the capacity of Cuixart, since figuration reached abstraction through the human figure. The woman, in the work of Cuixart, plays a very important iconographic role. In his quest for beauty and perfection, he performs hundreds of paintings with different techniques and supports on this subject: the woman. A subject that was derived towards an exploration of the interior of the character he painted. Cuixart, furgued within femininity and his works were filled with symbols, woman were the muse. However, not only did he limit himself to painting female faces, but the male faces are also present. Homages to specific characters, projections of other imaginary characters, are part of their world. With incredible power of imagination, he makes portraits, fragmented busts that are held in a dense atmosphere of feelings and emotions to reach the purest abstraction and delirium.

The female faces hang their wings of feathers of unknown angels,

while fading blood of the insects

gives the precise sense of the line in hand.

It is not necessary to guess man a new destiny, or to consume it Time in academic illusions,

since the return of the gods

It is nothing more than the shadow of a black pitcher full of light strawberries.

If the sandy mouth of the beach bakes sweet salt water

the moon on his part will bite the sleeping sex of the virgins.

vegetable bowels in fire as hair intertwined with feathers,

instincts and acts of doing and undoing.

The smile of the nipple that protrudes

causes the caress of the lips

at the same time that the eyes disappear in the gaze. 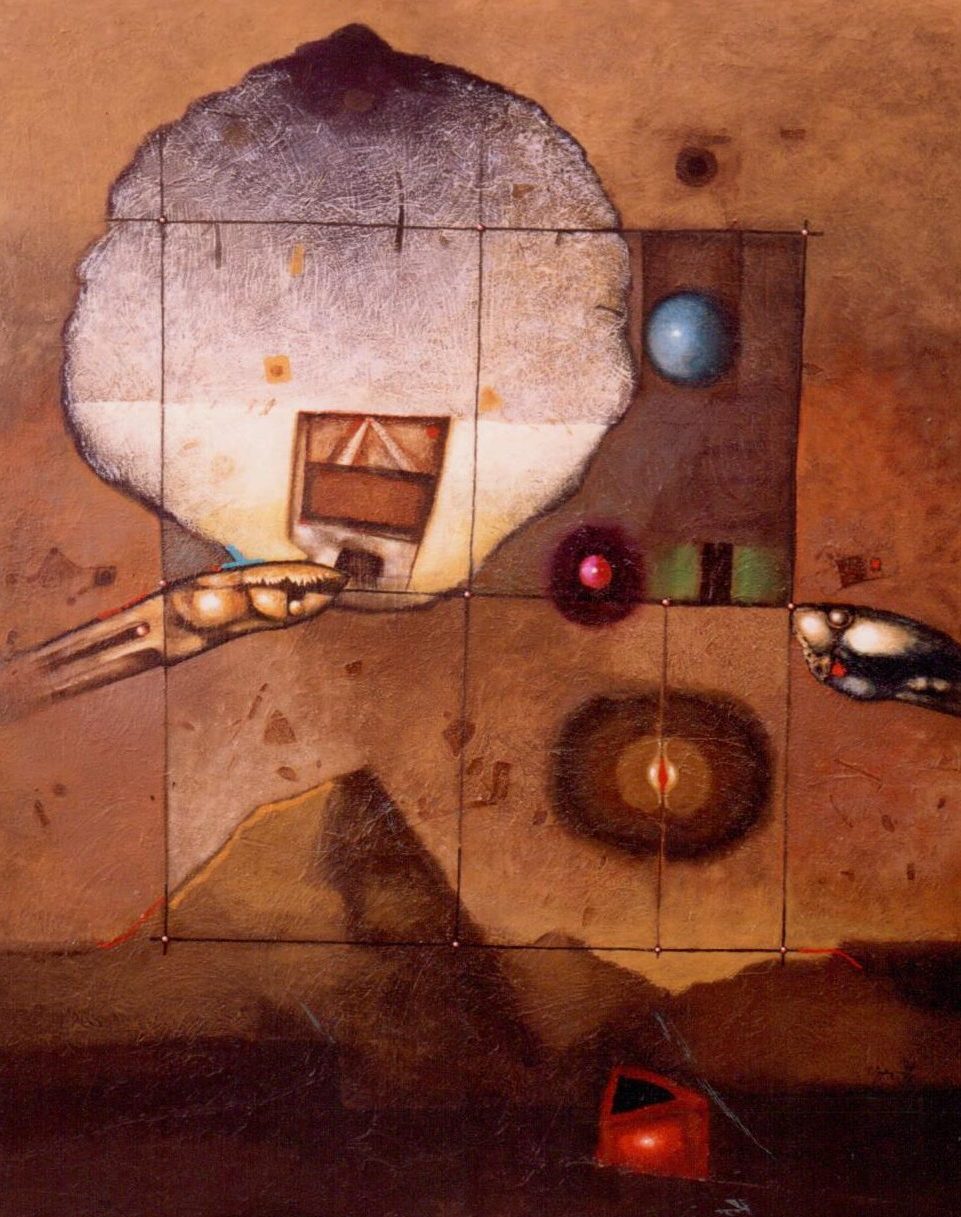 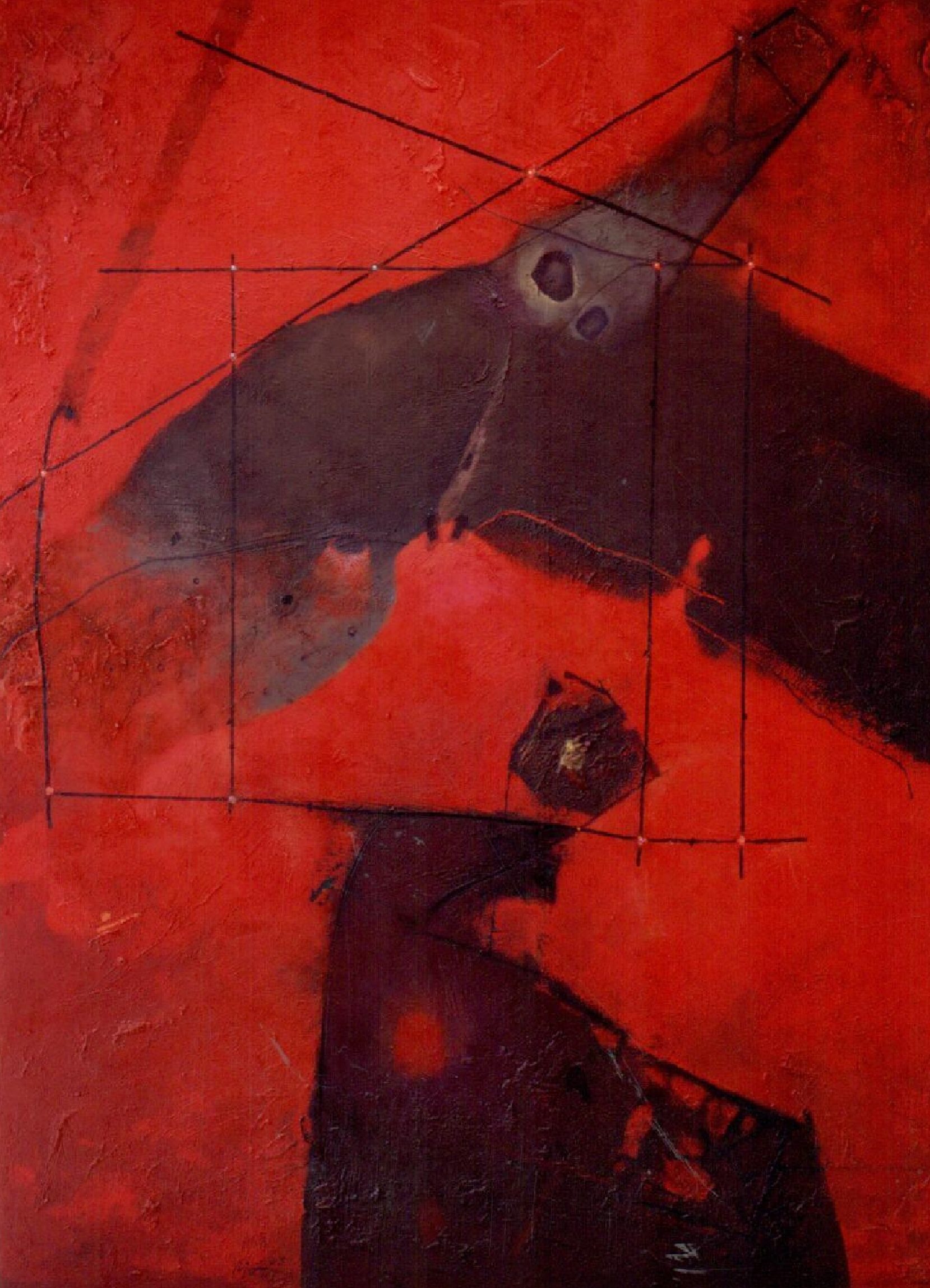 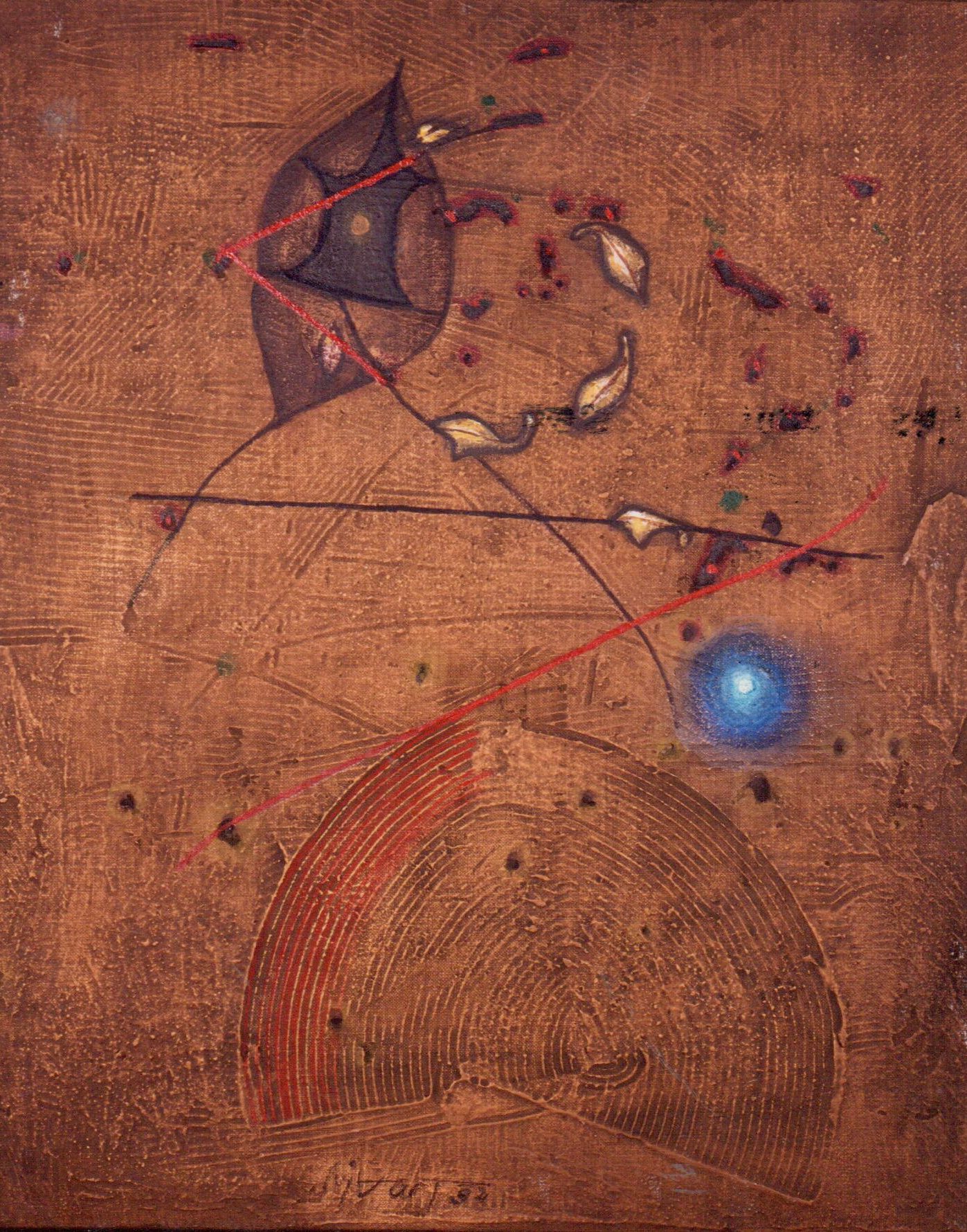 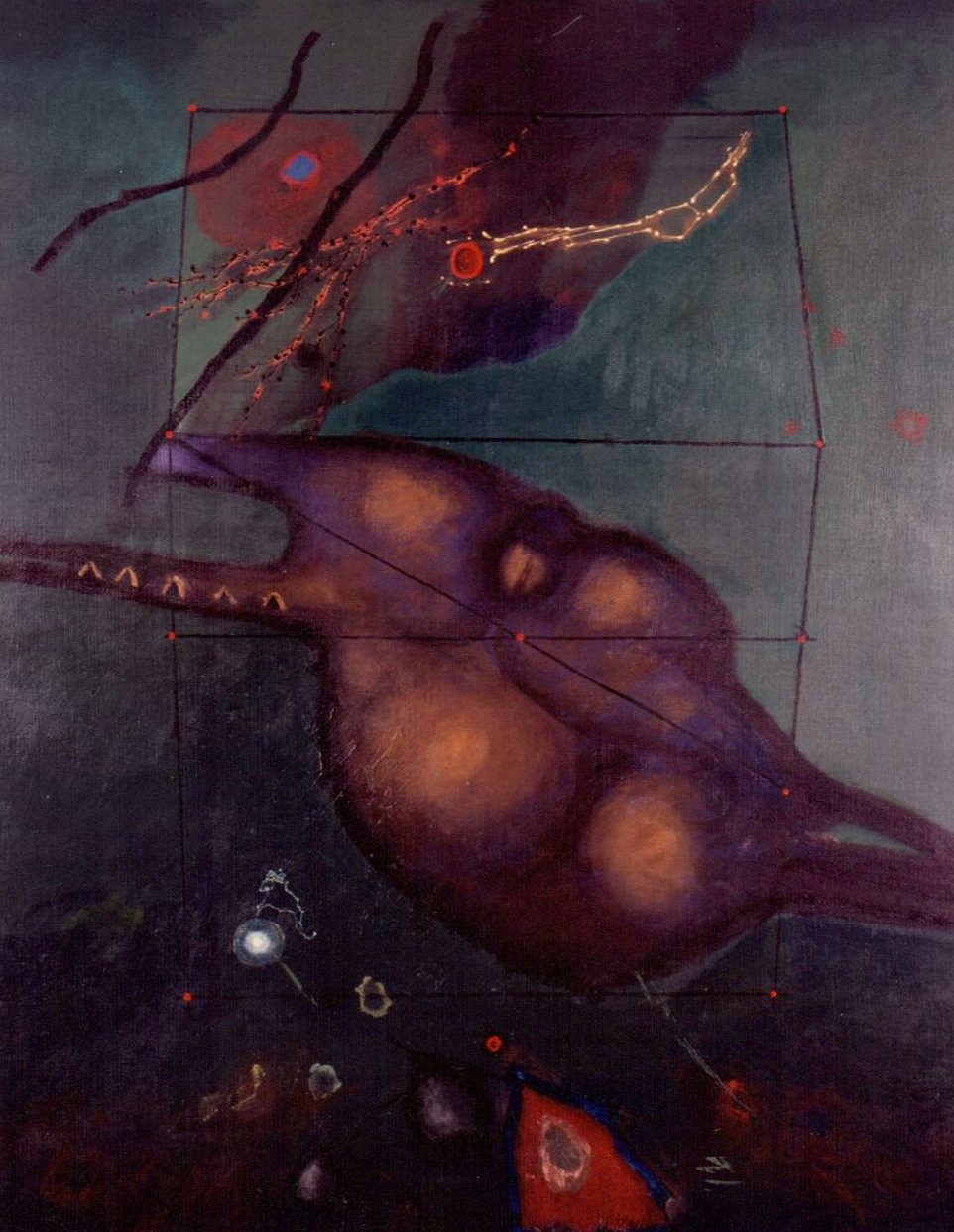 With this stage we open the doors of the true Cuixart. In his later period consolidated his mastery and that this is in turn the hidden face of the work of Modest Cuixart: the painter, the thinker, the intellectual. Works depicting Pericles or Aristotle, atom, fractal, symbolism, universe, fundamental elements and again, matter and abstraction. The great austerity is the pictorial medium that in the last period of his life will condition his work: to say everything with few words. In almost all his work, the artist closes his life cycle. And it is the clear proof that modern, abstract or informalist painting is pure philosophy and intellectual thinking. Behind the work there is a thinker. In this case, a free thinker, intellectual, pioneer and a clear reference for future generations, as it was for him his predecessors Picasso, Miro and Paul Klee. After almost 75 years of intense and fruitful professional work Cuixart, leaves us a beautiful legacy, immense and exceptional, a gift for feelings and thought. His desire during the recent years he expresses himself in freedom and show his imagination and his way of being through painting. This last stage is a return to nature, to informalism, to plastic magicism. In the matter in the purest style of a mature Cuixart. Retired in the technique, as he said;

“You can feel the color with the pulp of your fingers.”