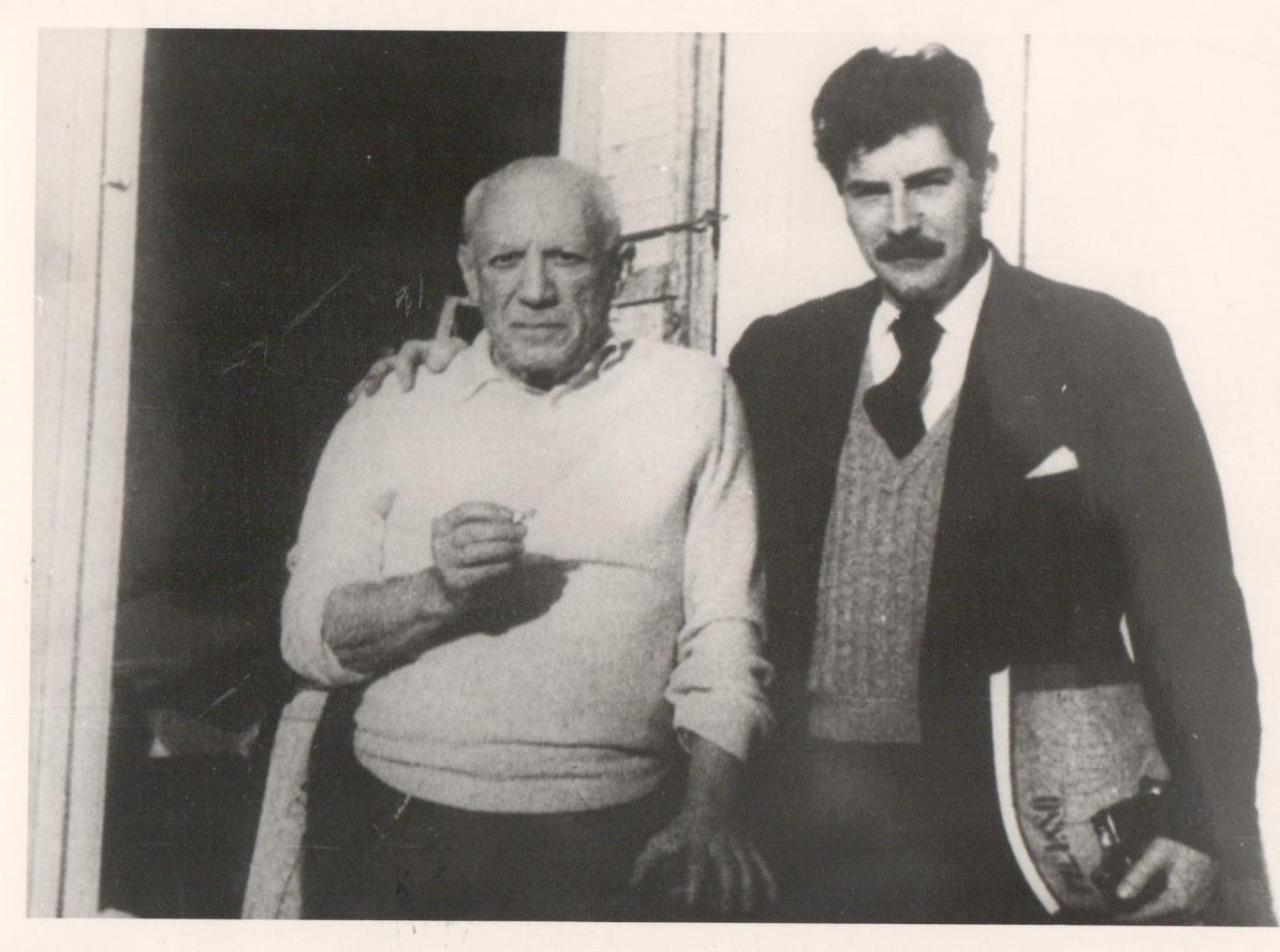 Modesto Cuixart was born in Barcelona on November 2, 1925 into a family of doctors and pharmacists immersed in a cultural environment. Gatherings with musicians, poets and painters were commonplace in his home. His father Joan Cuixart was a doctor. His mother Maria Tàpies played the piano and had a special talent for drawing and painting that she passed on to her son. Modesto began painting at a very young age. He had three sisters, Josefina and Anna Maria, older than him, and Maria Rosa, the youngest. They often listened to music on the pianola, read poetry and his father and grandfather played magic games or played with a small wooden theater that his father had built. He studied at the German School until it was closed by the Franco regime. He was orphaned at the age of 14 and his mother, in order to support the family, sewed fancy hats for an Italian company. He began a career in medicine to follow the family tradition, although he abandoned it two years later to devote himself to painting, his true vocation.

Together with his cousin Antoni Tàpies they met Joan Brossa, Joan Ponç, the philosopher Arnau Puig and Joan Tharrats with whom in 1948 they founded the magazine Dau al Set, in which Cirlot collaborated regularly with his articles and poems. Thanks to a grant from the French Institute he traveled with his cousin Antoni Tapies to Paris in December 1950. There he met Picasso and Miró, went to the Sorbonne and became impregnated with the art autre of Dubuffet and Fautrier.

He moved to Lyon where he began an intense period of material experimentation (pyrogravat, encaustic, grattage… until dripping). There he met the poet and gallery owner Marcel Michaud who was very interested in his work and invited him to exhibit in his gallery, he himself introduced him to the Parisian gallery owner René Drouin and from then on he exhibited in Paris and in cities all over Europe.

He married Mariona Goday and they had three children Marc, Judit and Noemi. At the end of the 50’s he made his famous drippings with metallic tones that are part of his peculiar material informalism. Praised by the most prestigious critics of the world as a true renovator of the informalism on an international scale, he obtains the most coveted prizes. In 1959, he wins the Gold Medal of the prestigious Swiss Prize of Abstract Painting in Lausanne and the Grand Prix of Painting of the V Biennial of São Paulo – with nine magnificent pieces, most of them of large format – before contenders such as his admired Francis Bacon, Alberto Burri, Karel Appel, or Lucio Fontana (who won the silver medal in Lausanne), a fact that fully confirms the magnificent moment that the artist is living.

It is a period in which the successes multiply, he is requested to the most outstanding international events and exhibits in the main museums and galleries of many countries. First class collectors from all over the world acquire his works, which are dispersed to many different destinations. Praiseworthy articles by the best critics are published in prestigious international magazines such as Arte Actuel International (Lausanne), Quadrum (Brussels), Cimaise (Paris), XXe Siècle (Paris), Das Kunstwerk (Baden-Baden), Ars Magazine (New York), among many others. André Bréton then decided to include a Spanish painter in the international surrealist exhibition E.R.O.S., which he organized in 1959 with Marcel Duchamp for the Daniel Cordier gallery.

Dismayed by the bitter controversy that arose around his last exhibition at the René Metras gallery with his new figuration, he separated and left with his close friend and patron, Ramon de Batlle and his wife Juanita, to a small village in Girona, Riudellots de la Selva. In 1974, he met Victoria Pujoldevall (with whom he would have his son Joan) and they settled in Palafrugell in an old modernist house and built his studio-laboratory (designed by Marc, his eldest son, an architect).

The death of Ramon de Batlle as a result of cancer, caused him a very intense reaction, he abandoned painting for a long period and resumed it with works of a terrifying expressionism. It was a parenthesis in a bohemian stage marked by excesses and by a figuration that in the early seventies is phantasmagoric and precious and in the eighties becomes strident in form and chromatism, criticizing the decadence of society from a decadent painting. The last stage corresponds to the 90’s and is characterized by a return to the sobriety of his best times through an introspection to the subterranean and atavistic nature that demonstrates a great maturity, technical and conceptual.

For many years he struggled to avoid losing his sight due to severe diabetes. He died on November 1, 2007. In Palafrugell there is a square in homage to the painter and his brushes, which he honored by burying them in the garden when they were no longer useless.

Cuixart painted for 75 years always moved by an unwavering desire for freedom and maintaining a peculiar balance between sanity and rapture, intellectual reasoning and Mediterranean impetus. He was a person open to deal and make solid friendships with people of any social class, from fishermen to great personalities of art, society or politics. A man of great culture in all areas, he seduced with his gentle character, his personality and his brilliant and pleasant conversation.

Cuixart, polyhedral and contradictory, upholder of freedom and risk, invites to reflect and deepen in his work. It is not in vain that he has elicited the glowing praise of such diverse personalities as Marcel Michaud, Juan Eduardo Cirlot, Arnau Puig, Perucho, Santos Torroella, Pierre Restany, Jean Jacques Lerrant, Wil Grohmann, Eduardo Westerdahl, Juan Manuel Bonet, Caballero Bonald, Giralt- Miracle, even a considerable number of critics, writers, thinkers, as well as artists such as Zush/Evru, and it has even inspired poems (among others, by Brossa, Santos Torroella, Cirlot, Foix, Michaud. ..) and even musical compositions (Xavier Montsalvatge, Xavier Turull). All captivated by a work that undoubtedly deserves to continue to be the object of attention and critical study by curators and specialists.